Bed Bugs and How to Deal With Them 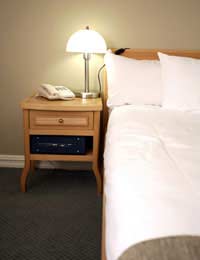 “Night-night sleep tight, don’t let the bed bugs bite” – with reports indicating that bed bug infestations around the world are growing at a staggering 500% per year, this old saying has gained a whole new relevance. Recorded as a pest throughout history, their numbers had declined significantly after World War II – largely as a result of the use of insecticides such as DDT and a general improvement in the standard of living.

Ironically, many experts now suggest that this same trend has contributed to their resurgence – global travel providing a convenient taxi-ride for bed bugs and central heating making conditions ideal for them once they arrive.

The common bed bug rejoices in the Latin name Cimex lectularius – a long title for this flat, wingless insect, only 6–8mm in length.

Active after dark, they emerge to feed on the blood of unsuspecting sleepers. Taking around ten minutes over this meal, they can consume five times their own body weight, changing from paper-thin and pale, to dark and bloated.

Each female lays up to 500 eggs in her lifetime – 10–50 every week – which hatch six to sixteen days later in a warm room. The newly emerged young seek out their first meal at once, reaching adulthood two to six weeks after emerging. Four generations can be produced annually, leading to a swift – and persistent – infestation.

Surprisingly, bites are not the best indication, often wrongly being blamed on mosquitoes or fleas. In addition, a large number of people do not start to show the typical red bumps until they have been repeatedly bitten over a prolonged period – perhaps even as much as six months.

The only way to be sure is to look for other signs, concentrating on their daytime hiding areas – dark crevices, often within the bed itself, especially the headboard, the mattress or the joints of the frame. However, they will use anywhere suitable, so any likely-looking gaps should be explored – window or door frames, wallpaper joins, carpets, even unlikely places such as power sockets or smoke detectors.

Apart from live bugs themselves, the signs to look for are:

In addition, a sweet, musty smell is often present in severe cases.

This is definitely one time when an ounce of prevention is worth the proverbial pound of cure. Infestations arise when bugs are unwittingly transported into a house in luggage, clothing, furniture and other belongings. Rare in single-family dwellings, bed bugs are more common in places with a high turn-over of inhabitants, such as hotels, motels and hostels – hence the link to travel. It is not simply tourists, however, who help this pest move around – the antiques market and the rise of the car boot sale have also been implicated in their spread!

To avoid providing a new home – and food-source – any antique or second-hand furniture, especially beds, should be carefully examined for the tell-tale signs – as should the clothing and baggage of travellers. Identifying a potential source of infection before it takes hold is immeasurably easier than dealing with one once it has.

Dealing with an Infestation

Bed bugs are hardy. Young and adults alike routinely survive for up to two months without feeding – some adults have lived for a year between meals. Their secretive nature and inaccessible hiding places make them hard to reach with pesticides and in addition, their breeding ability allows survivors to re-populate very quickly. Swift action is called for once an infestation has been discovered and severe cases almost certainly call for the services of a reputable pest control company – who are, these days, extraordinarily sensitive and discrete.

Treatment typically involves laundering the bedding – the hottest possible wash for the fabric – and treating all sites of activity with a suitable spray, such as Protector C – a process which will need to be repeated every fifteen days as successive generations of eggs hatch out. For items which cannot be sprayed, insecticide dusts such as Drione and Agrothrin are invaluable.

Fumigating the affected room with the likes of a Fortefog P mini-fumer – which requires the room to be shut up for several hours – can also be very effective, as the smoke can kill bugs where they hide. This can also be used as a follow-up treatment.

While it is disturbing – to say the least – to imagine sharing your bed with a bunch of blood-sucking parasites, the story is not entirely bleak. Although incidents are rising, they remain far less common than in 1880, when more than three-quarters of British homes were affected; even as late as 1930, the figure had only fallen to one in four.

Modern methods of pest control also mean that our oldest bedfellows are more readily eradicated than before – and without having to resort to the 18th Century remedy of turpentine, lamp oil and camphor.