Home > Outdoor Pests > Protecting Your Garden Against Rabbits and Moles

Protecting Your Garden Against Rabbits and Moles 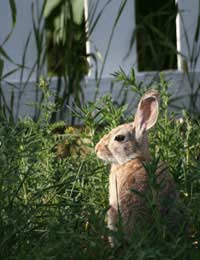 Two of Britain’s best known and most instantly recognisable wild animals, rabbits and moles both often become the cause of nuisance and distress to gardeners. Although both live in underground tunnels, the similarity really ends there and the problems they bring to the garden and the sorts of measures likely to help keep them out are quite different.

Moles are solitary and chiefly eat worms, with additional slugs and insects. Rabbits live in extended groups and their ability to decimate plants is legendary – amounting to an estimated £100 million of damage yearly. Although a ruined lawn is never a good sight, the damage that moles do is unintentional and arises as they excavate their extensive network of tunnels and underground chambers. They are highly territorial and aggressive to each other, living alone outside of the breeding season, so if you do have a mole problem, it is most likely the handiwork of just one creature. By contrast, rabbits really are intent on munching their way through your greenery and are likely to return in their droves once they have found a good spot to eat.

If rabbits are known to be a problem in the area, a strong wire mesh fence is a good first line of defence, ideally around the whole garden perimeter if possible. It should be 1 – 1.5 metres high and extend 30cm or so below ground level – and angled outwards – to stop them simply burrowing underneath. Suitable rolls of wire, with holes no bigger than 2.5cm, are often sold at very reasonable cost in agricultural suppliers specifically for this use.

Vulnerable plants or beds can be protected individually in much the same way and wire mesh or purpose made tree-guards will protect young saplings from having their bark stripped. In addition, some gardeners have found that growing garlic as a companion crop to plants which are particularly at risk has helped reduce damage.

One of the most effective pest repellents, a bone-oil preparation called Renardine, which had been in use to repel a variety of pests – including both rabbits and moles – since the late nineteenth century, is now no longer legal to buy, use or store. However, other types of chemical repellent appear to offer some protection against rabbits, though their effectiveness appears to be lessened in wet weather. Various modern devices are also available which use motion detection to trigger a response to pests arriving in the garden. Ultrasonic devices are designed to produce sounds at a frequency that rabbits find unpleasant, while the Contech Scarecrow – a motion-activated sprinkler – repels them with a short burst of water.

In the event that these measures fail, however, professional help is probably going to be required and the solution is likely to have to be drastic – shooting, ferreting, cage trapping or gassing being typical methods, depending on the circumstances and numbers involved.

Getting Rid of Moles

Over the years many ways have been tried to drive away moles, including filling the tunnels with brambles, various strongly smelling or noxious substances and even used sump oil – most of which are distinctly illegal today! Burying empty bottles up to their necks in the ground is another old favourite – sometimes with a child’s toy windmill added to each. It is said that the noise made when the wind blows annoys the moles so much that they will leave.

As with rabbits, modern technology has also been brought to bear on the mole. Some devices are supposed to interfere with the Earth’s magnetic field and stop the animal from being able to navigate, while others use ultrasound to protect the garden.

A more organic approach which some people claim to be effective is to grow the caper spurge plant (Euphorbia lathyris), which is said to exude a natural mole repellent from its roots – though this biennial may itself become something of a weed if left to seed freely!

Unfortunately, if deterrence does not work – opinions vary on the success rate of all of these approaches – and you cannot simply put up with the molehills on your lawn, the only options left are trapping or poisoning. Although trapping is a skilled occupation, it can be learnt and used successfully by the householder; poisoning, however, is definitely one for the professionals only.

Protecting your garden from these pests is not easy at the best of times and, especially in areas where either or both are prevalent; preventing them completely may prove virtually impossible. However, with knowledge, determination and a little ingenuity, it should at least be possible to limit the damage they do.