Protecting Your Pets from Foxes 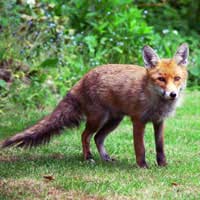 Almost legendary for their ingenuity in raiding rural hen houses foxes deserve their wily reputation and, with urban fox numbers growing, pet owners should never underestimate their intelligence or determination. Given the opportunity, a fox will happily kill any small domestic animals such as rabbits, guinea pigs, ducks or poultry and may even prove something of a nuisance to a cat or small dog. Although there is no one single solution to fox problems, there are ways to minimise the potential threat to your pets.

Don’t Invite Them in

Keeping them out of the garden in the first place is one obvious approach but while a fox-proof perimeter fence would be costly and probably unsightly too, a few simple precautions can often help to make things less inviting. Foxes generally enter gardens for the food and shelter that they can find there – and not giving them either is a good start.

If you want to feed the wild birds, for example, use a proper bird table or feeder rather than simply throwing food on the ground; foxes climb well, so a covered table 1.5 – 2 metres above the ground should stop them from being able to raid the larder. It is also a good idea to clear up anything the birds themselves have knocked off before nightfall – along with any other potential attractions, such as windfall apples, barbeque scraps or pet food that may be lying around your garden.

Waste too should be kept securely; the rise of wheeled bins has reduced the routine bag raids which used to be a common source of fox food, but even these are not immune to a really determined vixen with young to feed. Likewise, in our recycling age, kitchen scraps in compost bins can offer a potential meal – so a well-placed bicycle “bungee” cord may be called for to keep that lid firmly in place.

Many litters of cubs have started out life in dens dug beneath a garden shed, so it is worth making sure that any inviting-looking holes are filled in and the garage or house itself should also be checked as urban foxes have lost much of their natural fear of us. For the same reason, any sheds, garages or outhouses should be kept locked at night.

If a more “active” approach appeals, various deterrent devices are available triggered by the same sort of motion sensor used in security lights. Automatic water-jets connect to a hosepipe and deliver a powerful squirt towards the intruder on detection. Often sold to scare off other people’s cats, they can be used to dampen the ardour of a marauding fox pretty effectively too. Ultrasonic devices are also on sale. The Fox Repeller for instance, automatically protects an area of up to 220 metres, firing a continuous burst of variable ultrasound at any fox straying into its detection zone. However, the frequencies used by these machines are also likely to be audible to cats and dogs, so they are probably best avoided if you have either yourself.

All hutches, pens and runs simply must be strong, secure and fox-proof to avoid inevitable tragedy. Foxes are superb climbers, jumpers and diggers, can chew their way through wood in a surprisingly short time and bite through chicken wire. Weld-mesh offers far better protection and should also extend below the ground around runs, to thwart any attempts to dig under it, or tip the whole thing over. Catches and bolts need to be firm – Mr. Fox has an uncanny ability to find and open those which are not – and it should go without saying that small animals should never be left to graze the lawn unattended even in daylight. Although naturally nocturnal, urban foxes are often seen during the day.

Although small pets are most at risk, foxes also carry a number of parasites and diseases which can affect larger animals too – and scuffles between them and cats or dogs are not unknown, though probably not so common as is often thought. Foxes are usually alive with fleas and often have a highly contagious form of mange, which causes skin irritation and severe hair loss, as well as carrying roundworms, tape-worms and possibly leptospirosis (Weil’s Disease) and parvovirus. Although these can be transmitted to other animals – especially dogs – in most cases, protecting your pet with routine vaccinations, worming and flea prevention should be all that is required. However, in areas where fox problems are rife – or if your pet is old or infirm – it is probably worth checking with your vet, just to be absolutely sure.

The fox is part of Britain’s natural heritage and for many people, seeing them in the garden is a source of great joy; for those with small pets, however, the situation demands awareness, vigilance and prevention, as the urban fox is unlikely to go away.