Recognising the Signs of Underground Pests 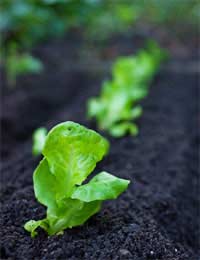 It’s hard enough keeping on top of the vast numbers of pests that you can see waiting to eat the leaves, stems and flowers of your plants, but when it comes to those that lurk beneath the soil, then the job can become a good deal more difficult.

Plants that are being eaten below ground can show a number of different signs, so any discolouration or distortion of the leaves or stems should be investigated, as soon as its noticed, for any obvious cause. Assuming that there are no pests visible on the plant’s above-ground surfaces that might account for the damage – such as aphids, caterpillars or any sort of fungal infection – then it’s as well to start suspecting the presence of some kind of soil pest, particularly if a large number of the same type of plant seem to be affected.

Most of the real signs of these kinds of pests are to be seen underground, so the only way to be sure is to dig up one of the affected plants and have a good look. Pick the one that seems to be suffering most and dig it up, making sure that you don’t flick too much soil around healthy neighbours, to avoid the risk of spreading things more quickly.

Some underground pest such as the caterpillar of the swift moth are large enough to see with the naked eye, while others – including eelworms – are microscopic, so you’ll have to examine the plants themselves for evidence of them.

Swift Moth caterpillars have voracious appetites and these brown headed, white bodied grubs will eat almost anything they can find below ground, bulbs, corms and tubers as well as plant roots. They are fairly easily recognised, characteristically reversing on their short stumpy legs when disturbed. They can cause serious damage in a variety of plants including all kinds of flower-bed annuals and perennials, attacking the roots of lettuces and brassicas such as cabbages and cauliflowers and hollowing out parsnips and carrots from the inside.

There are no really effective chemical controls available to deal with Swift Moth caterpillars, but regular hoeing and digging together with frequent weeding can help keep the numbers of these pests down.

Similar measures are also effective against many other kinds of soil-living pests, including the likes of Chafer Grubs and Cutworms.

A number of varieties of microscopic eelworms affect different types of plants, with vegetables suffering particularly badly from them. Potato cyst eelworms, for instance, attack potatoes and tomatoes – turning their leaves yellow and then black, before ultimately causing premature die-back. Examining the roots of affected plants will show them to be covered in 1mm cysts – actually the swollen bodies of female eelworms full of eggs, which will remain viable for many years.

Yellowing leaves in cucumbers, lettuces, tomatoes or beans coupled with the appearance of galls on their roots is likely to be the work of root-knot eelworms, while distorted and swollen leaves – especially in onions, carrots, peas or beans – could well be due to stem and bulb eelworms. They also attack flowering bulbs, including daffodils and tulips, causing them to go soft and rotten.

Although it is not an easy task, there are two main elements in controlling eelworms – ruthlessly burning any infected plants and if you develop a serious infestation, change the type of plant you grow in that part of the garden. If you can avoid replanting with the same thing for five or six years, you should be able to break the cycle of re-infection; eelworm eggs are persistent in the soil, but even they don’t last forever!

Roots, bulbs and the other succulent, fleshy underground parts of your treasured plants offer a very good meal for a surprising number of insects and other pests – and often, by the time you spot that something is amiss, a lot of damage has been done. Keeping these hidden pests under control calls for vigilance, a good soil cultivation routine and the willingness to take swift action if you do find yourself with a problem.

Dealing with underground pest is never going to be easy – but you don’t have to let them have it all their own way!

Vulnerable Plants in Your Garden

Signs of Leaf and Stem Pests