Home > Indoor Pests > What are Ticks? 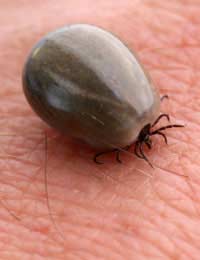 Ticks are small blood sucking relatives of spiders, scorpions and mites that lurk in slightly damp, shady places such as grass, bracken, bushes and leaf litter, awaiting the arrival of a suitable animal to feed on. There are a number of different kinds of tick to be found in Britain and although many are very selective, preferring one particular creature, many are less picky eaters, happily feasting on blood from our pets – and us – if they get the chance.

Globally, ticks are an important vector of disease, but fortunately, although British species do carry a range of infections which can affect humans – the most serious being Lyme Disease – the risk is quite small, especially if a few straight-forward precautions are taken.

Hungry ticks which have not fed for some time – an adult can go for nearly two years between meals – resemble small spiders and, since their bite is painless, they can often pass unnoticed. However, once they have started to feed, when they begin to swell up with the blood they are drinking, spotting them becomes much easier, as the whole of the back part of their bodies bloat, leaving them looking like small, grey peas.

Although ticks can attach themselves anywhere, they have a tendency to prefer warm, moist and dark places on the body so they can feast undisturbed – the armpits, groin, navel, throat, hairline and behind the ears being particular favourites.

Ticks are most active – and hungriest – between April and October, though in mild winters, they can remain an all-year-round problem.

It used to be said that a tick had to remain attached to its host for some time before there was any risk of infection, but recent work has shown that this is not a reliable guarantee, so there is much to be said for removing the offending bug at the earliest opportunity. The goal is to remove all of the tick – including the mouth-parts embedded in you – without making it regurgitate into the wound, which would obviously increase the chance of disease.

Some people suggest burning the tick off, or using nail varnish remover or other chemicals to make the tick let go, but this is not really to be recommended and may even cause more harm than good. Since dogs and cats are often bothered with ticks, vets and many pet shops sell a purpose built tool for tick-removal, which is designed to grip its head and pull it out in one piece. Alternatively, grasp the tick as close to your skin as you can with a pair of pointed tweezers – taking care not to squeeze the soft bag of its body – and pull it out straight without twisting or breaking the head off. If tweezers are not available, a loop of cotton tied around the bug – next to your skin – can be used to do the job. Once the “operation” is over, apply some good antiseptic to the spot and if the head has been broken off, it is always a good idea to consult your doctor, especially if there is any discomfort or poor healing.

Lyme disease is very rare and seldom fatal, though it is a debilitating condition that can have long term health effects, so it is as well to be aware of the symptoms and get treatment as early as possible, if needs be. The first sign of infection is often a red spot near to the tick bite, which gradually gets larger until a pale area develops in the centre – often accompanied by headaches and fever. For some people, however, the symptoms are less clear and may seem more like flu – so a visit to your GP is essential if you have been bitten and think that all is not well.

The most effective ways of staying free of ticks is to make it difficult for them to get to your skin in the first place. When walking in likely “tick-country” wear long trousers tucked into your socks, boots or shoes rather than sandals, keep your cuffs buttoned and use a good insect repellent everywhere else. Light coloured clothing can help also, making ticks easier to spot if they do try to mount an invasion. Keeping out of places likely to be harbouring them when you are out on a walk and staying in the middle of paths can also help to reduce the chance of picking up any unwanted visitors and once you get home, check yourself – and any doggy companions – for hitch-hikers.

The vast majority of people in Britain who are bitten by ticks suffer no ill-effects – except the indignity of knowing that they have provided a free meal to a rather unsavoury parasite. Ticks are as likely to be encountered in urban parks and the wilds of the countryside, so it pays to be aware. A few simple precautions should enable you to enjoy your time in the great outdoors without ill effects, but if you do get bitten and feel at all unwell, never be afraid to make that appointment with your doctor – it is always better to be safe than sorry.