Getting Rid of Aphids 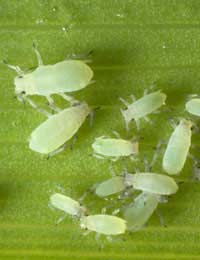 Aphids – greenfly and blackfly – are one of the most instantly recognisable of garden pests all-too-commonly seen infesting the delicate tips, flower buds and young leaves of a wide variety of plants, especially in early summer. When present in large numbers, these sap-sucking insects are capable of causing seriously stunted growth and some kinds can also transmit disease from plant to plant as they feed.

Fortunately, however, there are many ways to get rid of them, ranging from natural, organic methods through the well-known trick of spraying with soapy water – not exactly “chemical-free” but often effective – to a number of very successful insecticides.

Aphids are small, soft-bodied insects, typically 1–5mm long, which feed by puncturing the plant’s tissue to get at its sap, which they consume in large quantities and secrete a sticky substance called “honeydew” on the leaves. Some kinds of aphids are “farmed” by ants, which themselves feed on the honeydew, tending and protecting the greenfly from predators in a sort of two-pests-for-the-price-of-one scenario.

Eggs laid the previous year hatch out in the spring and the wingless females that emerge quickly give birth to live young – which explains their sudden population explosion early in the year. When overcrowding becomes a problem, winged forms develop spreading the pests to more and more host plants as the summer draws on and in the autumn, eggs are laid, which will over-winter and begin the whole cycle again. Some adults can also survive outside, particularly in mild winters – or hiding indoors on houseplants.

Some types of aphids will only infest one or two types of plants, while others can be found on a wide variety; the majority suck sap from the above-ground parts of the plant, but some feed at the roots.

Greenfly and their kin have a number of natural enemies, including ladybirds, lacewing larvae, hoverflies and some kinds of parasitic wasps. While some of these aphid-eaters can be found on sale – principally in specialist outlets for use in commercial greenhouses – for the average gardener, encouraging them to visit naturally is likely to be a more practical approach. Planting milfoil in the garden is said to attract ladybirds, while growing yellow flowers, particularly marigolds, will certainly draw in hoverflies. Alternatively, pyrethrum – sometimes called tansy – a plant which emits a natural insecticide from its leaves, can be grown alongside the plants to be protected and some gardeners have found that alliums, plants such as chives, garlic and onion, also keep aphids away.

Although not natural methods of control as such, many of the products available for use are never-the-less based on substances found in nature. Some products are based on pyrethrum – the natural plant insecticide mentioned above. In other pest sprays marketed as “organic”, fatty acids form the active ingredient.

These products need to be sprayed directly onto the aphids themselves to work and their effect is relatively short-lived. As a result, treatment needs to be very thorough if it is to be successful and obviously any missed aphids – or ones hiding within buds or curled leaves – will escape. However, this type of insecticide can safely be used on plants, fruits and vegetables up to a day before picking.

Artificial insecticides are generally more efficient in controlling aphid infestations, but this higher level of protection comes with some additional restrictions. Many which are very effective pesticides contain the synthetic chemical bifenthrin, cannot be used on certain types of plant and even where it can be applied, there are still limitations on its use. These products, like the preceding ones, are “contact” insecticides – needing to touch the aphid to kill it – and also allow edible plants to be picked very soon after spraying.

There are some insecticides which offer an alternative method of treatment. They are called “systemic” – being absorbed into the plant itself and only affecting the aphids when they feed. Though the list of fruit and vegetables which can be protected is very limited indeed and harvesting must be delayed for some days after use, it does solve the problem of missed or hidden pests; as soon as they begin to feed, they will inevitably pick up the pesticide.

With over 500 species of aphid found in Europe alone and their light bodies allowing them to be spread for huge distances on the wind, it is small wonder that they are such a familiar sight in the garden. However, we do not have to grant them carte blanche to decimate our plants and whatever your favoured approach to pest control – “green” or otherwise – there is a method to keep them at bay.