Slug Pellets and the Problems 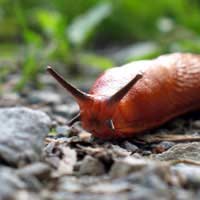 Slugs are one of our most widespread and persistent pests. The damage they can do to tender young growth being all too well known to just about anyone who has ever tried to grow anything in the garden. Able to remain active throughout a large part of the year thanks to the generally warm, wet British climate, few plants seem immune to their attention and it is small wonder that slug control accounts for such a high proportion of garden centre sales.

Of the various types of product available, slug pellets are by far and away the most commonly bought – a tried, tested and trusted method which has been used by generations of gardeners. However, though undoubtedly effective, traditional pellets are not without their problems and like all pesticides, need to be used correctly if they are to prove effective.

Slug pellets are pieces of cereal soaked in metaldehyde or methiocarb which act as bait, attracting the slugs with a free feed and then poisoning them. Metaldehyde was originally sold as a type of solid fuel and it is said that its slug-killing properties were discovered accidentally when farmers in France noticed large numbers of dead slugs around picnic sites. There are many different brands marketed, which are sold in vast quantities each summer by garden centres and other outlets.

However, despite the familiarity and widespread use of slug pellets, they remain potentially dangerous and must be used with care. Metaldehyde is officially classed as ‘moderately hazardous’ by the World Health Organisation, which means that while it is effective against slugs, it poses a risk to anything else which also eats it – including pets, wildlife and children.

The cereal which makes the pellets attractive to slugs also, unfortunately, appeals to other animals too, though to minimise the risk, manufacturers put in additives to make them taste bitter to dogs and the blue colouration is intended to stop them tempting birds. Metaldehyde in large quantities actually repells slugs, which is why the instructions for pellet application call for them to be spread thinly. Sprinkle them too densely and instead of taking the bait and being killed, the slugs will simply go elsewhere and find your other unprotected plants to eat. However, not only will upping the dosage in the mistaken belief that this will get the job done faster or more thoroughly actually work against you, it may also cause harm to pets or wild animals. Spread thinly, it is said that pets are not able to consume sufficient to make themselves ill.

While this may be generally true, significant numbers of pets do end up requiring veterinary attention each year, so it is not a foolproof precaution and vigilance is obviously required when using these products around pets or children. Toddlers may not realise that granny does not make a habit of sprinkling little, blue sweets around her garden any more than your dog knows that “hunt-the-pellet” is not some new and fascinating game.

Birds and other creatures which naturally eat slugs – such as hedgehogs and frogs – which are some of the gardener’s best allies in the battle against these pests, may also be harmed if they eat a slug which has been feeding on the bait – effectively taking the poison themselves. Although the dose required to kill a slug is many times smaller than that to kill a hedgehog, over time the same hedgehog can eat a very large number of slugs!

To help avoid these potential problems, there are various less toxic alternatives to traditional pellets available; including aluminium sulphate powders and the latest generation of chemical slug control uses iron phosphate. There is also a wide selection of non-chemical methods to combat slugs, ranging from simple gravel barriers, through copper rings and beer traps to a variety of approaches to natural control.

The slug war is almost certainly never one that can be completely won and it seems that there is no one ideal solution to controlling these persistent and widespread pests – the best results usually requiring a combination of different methods to keep their numbers down. While for many gardeners, this means that there will always be a place for traditional slug pellets in their armoury, knowing the risks – and being aware of the alternatives – should allow most of the problems to be avoided.