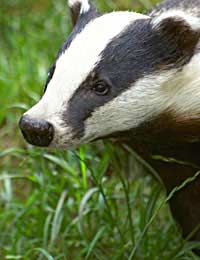 “It looked like a ploughed field,” says Chas Wilson, remembering the scene that met him one morning, shortly after moving into his new home in rural Scotland. “I’d never seen the like before, and I couldn’t imagine what had done it.” He found out soon enough; his lawn had become the fast-food outlet for a gang of foraging badgers – and judging by the devastation, they’d been pretty hungry.

“There were great big divots in the grass, and the bins had all been knocked over; we’d had a house-warming party a few nights earlier and most of that had been strewn all over the garden. Odd part was – I know my wife says I’m a deep sleeper, but I never heard a thing!”

Unexpected black-and-white guests popping in once to welcome the family to the village was one thing, but after a week of nocturnal visits, the family were beginning to feel that enough was enough.

“I asked one of the locals,” Chas explains, “ but he seemed to want to tell me all about why ‘townies’ like me shouldn’t try to change the country and so on. I got all the ‘they’re protected, you know’ stuff – which, of course, I knew anyway. I ended up feeling as if I’d asked him to come round here and slaughter them himself.”

Pippa, Chas’ wife, had much more success with the council. “The chap I spoke to couldn’t have been more helpful,” she says. “I told him we’re actually rather proud that they had come calling, but wondered if there was any way we could encourage them to be a bit less destructive – and he came out with all sorts of suggestions.”

The first thing Pippa did was pay a visit to the local hardware shop to buy a pack of strong elastic straps – the sort with hooks that cyclists use to attach luggage to bicycle carrier racks. Armed with these, it was a simple matter to make sure that the household’s bins stayed firmly closed, no matter how much Mr and Mrs Brock tried to get inside.

“It’s odd,” she says, “but that was a bit of a turning point. I felt we’d sort of begun to take control.”

Realising pretty quickly that fencing their garden with the sort of heavy duty wire that they’d need to keep the badgers out was going to be both ridiculously expensive and visually hideous, they decided that if they were going to manage the problem, they needed to know more about their ‘enemy’.

Through the local wildlife trust, they made contact with a nearby badger watching group, who were delighted to try to help – once, as Pippa laughingly explains, “they’d made sure that our intentions were entirely honourable!”

“We’d never really had anything to do with badgers where we lived before,” says Chas, “and we’d no idea just what fascinating animals they are.” In the course of a few short weeks, the Wilsons found themselves turning from reluctant badger neighbours to committed badger fans.

“We never felt bad about them,” Pippa continues, “but we weren’t really that keen on the mess they made. Learning about them really helped us manage their visits and that meant we could start to enjoy having them around – and that was great for the kids too.”

In the end, it was the man at the council who gave them one of their best tips. “He suggested what he called a ‘sacrificial area’ – giving the badgers a spot where they could enjoy themselves and do their thing, without destroying the whole of the rest of the garden. Where they were actually getting in was towards the back of our plot, so we were more than happy to let them romp around there.”

And how exactly do you restrict a family of playful and ever-ravenous badgers to just one part of your garden? Fortunately Pippa’s pal at the council had the answer to that too.

“Put out a can or two of dog food,” she says. “The wildlife purists don’t approve, but it works – and that’s good enough for us!”