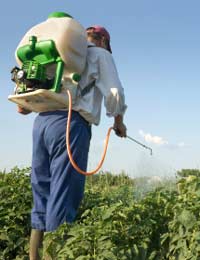 From chewing holes in our clothes to devastating important crops, insects cause an incredible amount of damage around the globe, so it’s little wonder that the world-wide demand for pesticides is set to rise to a predicted £35 billion by 2014. The biggest problem with all that chemical use, however, is that it’s as likely to kill insect ‘friends’ as it is ‘foes’ – and when you consider the vitally important work that beneficial insects do in pollinating plants and helping to keep their pest brethren in check, that’s not good news. Add to that our rising awareness of the dangers of pollution and it’s easy to see why there’s a ready market for more environmentally sensitive ways to keeping problem insects under control.

If the scientists working at Wrexham’s Glyndwr University have their way, there may soon be an eco-friendly spray available that will help deal with crop pests – but leave bees, ladybirds and all the other kinds of friendly bugs completely unharmed.

Many types of living things use pheromones – special chemical ‘smells’ – to communicate with other members of their kind, but few rely more on them than insects, and it is precisely this reliance that the researchers intend to exploit to produce their new green pesticide. By creating special synthetic versions of the insects’ natural pheromones in the laboratory, they hope to be able to disrupt critical stages in their targets’ lives, such as mating and egg laying, to ensure that there simply isn’t a big enough local population of pest to cause a problem.

The underlying idea is really very simple; lure gullible male bugs with an artificially enhanced scent that holds out the promise of highly-appealing – but entirely non-existent – females, and the real females that are ready and waiting to breed will be ignored. In one fell swoop, the numbers of hungry mouths waiting to decimate the farmer’s crops are slashed and, moreover, because the ‘fake’ attractant odour will only appeal to the pest species itself, this novel kind of insecticide should present no threat to any other wildlife. It’s a perfect ‘win/win’ – unless you happen to be the insect pest, of course!

Obviously, there’s more to developing a revolutionary new eco-friendly pesticide than just coming up with a good idea, and the scientists are busily working on solving some of the practical problems that they face. “In order to successfully disrupt the insects,” a University spokesman explains, “the pheromone release needs to have a concentration for a sufficient length of time.” Clearly, if the spray is too thin, it could be quickly washed away and that would leave the crops unprotected. On the other hand, a liquid which is thicker would last longer in the rain, but it might be far too difficult or expensive to actually spray.

Fortunately, the group has a lot of experience with using biopolymer thickening agents, and this expertise with tinkering with the consistency of liquids could well be the key to the whole project. Working in collaboration with Russell Integrated Pest Management, the scientists from the Glyndwr University Industrial Biopolymer Knowledge Transfer Centrehave already begun to make good progress towards their goal – and ultimately field trials await.

If it all goes according to plan over the coming years, the team believe that they will find a ready market for their product, not least because it is anticipated that it will be significantly cheaper than conventional insecticides. Moreover, with a sky rocketing global demand for food, the costs of pesticides rising year on year, and an increasingly environmentally aware world ever more concerned about the potential dangers of chemical overuse, it seems to offer the best of all possible solutions, and the benefits to agriculture worldwide could be enormous.

Developing any new pest control method is always going to be a challenge, but if you can end up with one that’s low cost and eco-friendly, it’s got to be worth the effort!