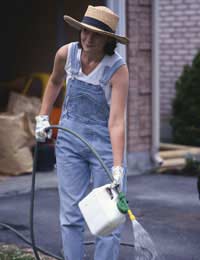 India is one of the fastest-growing economies in the world, and the contribution that agriculture makes to it is fast approaching 20 percent of the nation’s GDP; more importantly, around two-thirds of the country’s 1.15 billion population rely on farming for their livelihoods. Unfortunately this part of the world is also home to a huge number of hungry insect pests, and as growers across the globe know only too well, bugs and crops simply don’t mix. With farmland occupying most of the country’s 3 million square kilometres, that adds up to a really sizeable problem.

Attempts to stop valuable food plants from being destroyed have centred on the aggressive use of various types of conventional chemical pesticides, with some growers spraying daily, rather than once or twice a year as recommended. The net result of this has been high chemical residues in the environment, significant loss of other forms of wildlife, including essential pollinating insects and even reports of elevated cancer rates amongst local farming communities.

Happily, this may all soon be a thing of the past, if the effective – and decidedly unusual – approach that one British start-up company has brought to combat rice stem borers in the Punjab and west Bengal catches on.

Exosect’s solution is inspired by nature – by carnivorous pitcher plants, to be precise – and it’s the brain-child of Philip Howse’s long term fascination with the methods these unusual plants use to trap flies. Pondering how it might be possible to get loose particles to adhere to a fly’s sticky feet, and so make it helpless and fall into an inescapable trap – just like the real plants do – led him to realise that the same idea could be used to stick anything to insects with an electrostatic charge.

Pheromones are special chemicals that insects use to communicate with other individuals of their own species, transmitting a variety of signals that may warn of danger, advertise a good food source or broadcast their readiness to mate. The principle of using artificial versions of these scent-messages to attract and trap pests is well known, usually involving luring males into a sticky trap with the false promise of a waiting receptive female – but making sure that the odour stays strong enough throughout the breeding season can be a problem. A number of new solutions are being developed to overcome the problem – including another British invention using biopolymer thickeners to make the pheromone spray more long-lasting – but Exosect have taken an entirely different approach.

Their system first lures amorous males into a trap in the conventional way, before coating them in an innovative pheromone-soaked, electrostatically-charged wax powder – and then allowing them to go free. Each treated male now smells like a female in peak breeding condition, and himself acts as a lure for other males seeking a mate, which as Exosect CEO, Martin Brown, explains, probably comes as a “bit of a surprise.” The bottom line is that the pest’s breeding cycle is disrupted – and fewer successful matings ultimately means fewer hungry rice borers looking for an easy meal.

According to the company, the results to date have been very encouraging. Aside of the obvious direct environmental benefits – not least of which is the protection of important water supplies from contamination – the drastically reduced pest population has led to a 40-fold cut in conventional pesticide use in the surrounding area, further cutting local pollution. Driving down the amount and frequency of chemical use clearly improves the profitability of farming and has major positive implications for public health too; it seems everybody wins.

The success of this unorthodox method of pollution-free pest control – which can be precisely tailored to target a range of different individual insects – could hold considerable promise for the future of sustainable farming globally. With the world’s demand for food growing by the day, that has got to be good news.