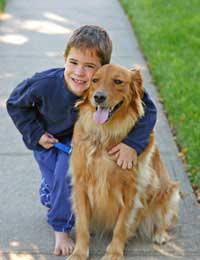 There’s not much to beat the companionship of your pet cat or dog – but sometimes they can bring along rather too many companions of their own! Just thinking about the ready army of parasites waiting for their chance to join you by the fireside is enough to start most people scratching, but the good news is that a few simple precautions can make sure your pets stay pest-free.

Most pet owners are only too well aware of worms. There are two main kinds of worm which commonly infest cats and dogs – roundworms and tapeworms – their names reflecting the shape of their body. Both live in the intestine and are white in colour. While roundworms can grow to around 15cm (6 inches) the tapeworm may be 60cm (2 feet) or more in length if left undisturbed. Aside of the discomfort they can cause your poor pet, both can be passed on to humans, so regular treatment to control them is vital.

Although different vets have their own preferred regimes, generally most advise worming every month or two, though more frequent treatments may be called for, depending on the life your pet leads. As always, your vet is the best source of information and will be able to prescribe the right course of action. Some treatments, such as “Drontal”, come in pill form, while others as powders – “Panacur”, for instance – which can be mixed in with food.

While these medicines are very effective, they only work at the time they are given – so the animal can be re-infested almost at once, if it comes across worm eggs. Some products, such as “Advocate”, are applied to the animal’s skin – usually to deal with fleas or mites – are also effective against roundworms and offer ongoing protection for around a month.

Roundworm eggs – too small to be seen – pass out in the faeces and are often picked up from areas where infected animals have done their business and their owners have not cleared up the mess. With Toxocara canis being the most common species in dogs – with the potential to cause some very nasty effects in humans, including blindness – there really is no excuse for not scooping that poop!

Adult tapeworms also distribute their eggs with poo, shedding segments of their own bodies – called proglottids – which act as egg capsules. Looking like flattened grains of rice, they can sometimes be seen on an animal’s fur after it has done its business. The most common way for your pet to become infected is from a flea infected with tapeworm larvae – another good reason to control those blood-suckers too!

Cat fleas are the most common type infesting both cats and dogs – and with up to ten times as many more lurking in the comfort of your warm, carpeted home, flea control definitely needs a two-pronged approach. There are many shampoos and sprays around to de-flea your pet, but products such as “Advocate”, “Frontline” or “Advantix” which are applied directly to the animal’s neck, represent the cutting edge of flea control. Whatever you use, remember to repeat it as often as recommended to avoid re-infestation while you set about dealing with the house itself.

The first step is a thorough vacuuming followed by treating your home with a good quality, long-lasting residual insecticide. There are many to choose from, some of the longest lasting, including the likes of “Indorex”, “Staykil” and “Vetkem Acclaim” are specialist products obtainable from your vet and will provide up to six months protection.

Flea collars can also play their part – hopefully making sure things don’t get out of hand in the first place.

Ticks are most often only noticed once they have attached themselves to our pets and started to feed – looking like small, grey peas. Many pet shops and veterinary surgeries sell a specially designed tool to remove them, which if used properly will grab onto the tick’s head and pull it out in one piece. You can also use a pair of pointed tweezers, taking care to get hold of the tick as close to the skin as you can and then pull straight – the tick should come out in one piece. It is always a good idea to check your pets routinely if they roam where ticks are likely to be a problem, especially between April and October, when ticks are at their most active.

Mites too can be a problem for our pets – amongst them some very unpleasant characters which cause various forms of mange, including scabies. In addition, around 90 per cent of cats are said to suffer with ear mites at some stage in their lives – kittens and young cats being particularly susceptible. These highly contagious parasites often cause the cat to hold its ears flat, shake its head and scratch uncontrollably, making the poor animal’s life a misery. If your pet shows signs of any sort of mite infection, a trip to the vet’s is a must; these “nasties” need swift professional attention.

Owning a pet is one of life’s great joys, but it does call for a little vigilance if Fido and Kitty are to be the only companion animals given house-room!