Different Pesticides and Their Uses 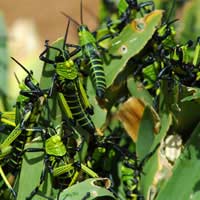 It has been estimated that without the use of pesticide, fruit and vegetable production around the world would fall by up to forty per cent, so it is small wonder that these products feature so prominently in the grower’s and gardener’s arsenal.

The term “pesticide” is, however, something of an umbrella description, referring simply to any substance used to control something which has been designated a “pest” – itself another blanket term, covering a diverse array of organisms. As a result, there are many different types of pesticide, ranging from rat-poison and slug pellets, to a wide variety of chemicals to control insects, weeds and fungi.

Insects are probably the most common type of pest encountered and as a group; they are arguably the most destructive globally. There are various forms of insecticides available to control them; which one to choose depends on a number of factors and, as with all pesticides, it is important to read the label carefully to be sure that it really does meet your needs.

Some need to be sprayed directly onto the insect itself, killing on contact, others can be used to dose an area or a particular plant, while “systemic” insecticides are absorbed by the plant to be protected and pass into the insect when it feeds.

If different types of insect are the problem – for example, the summer invasion of flies, wasps and earwigs – one of the general purpose, “broad spectrum” varieties may be the solution. Most insecticides on general sale fall into this group, but they are an indiscriminate weapon, killing friend as well as foe – and not every insect is a pest. In recent years, selective insecticides have appeared, allowing particular pests to be controlled – often by disrupting aspects of their life-cycle – without exterminating beneficial insects. However, they are more of a specialist – and expensive – product, at present seldom seen in the shops.

Duration is another important factor. A one-off event – perhaps a swarm of mosquitoes attracted indoors by the light – calls for an insecticide which becomes harmless fairly rapidly after use. An ongoing and persistent problem – often when the insects live and breed in the same place as they are causing a nuisance, like cockroaches or fleas, for example – needs a “residual” insecticide, to give long-term protection.

As a general rule, residual insecticides are used against “crawling” insects, while non-residual ones are aimed at those which fly.

Herbicides – “weed-killers” – are used to control plants growing where they are not wanted. As with insecticides, some herbicides are selective. The likes of Verdone Extra or PestFree Lawn Weed Killer, for instance, will destroy dandelions and other broadleaved weeds, but leave grass unscathed – ideal for the perfect lawn! Alternatively, products such as Roundup, Tumbleweed, Weedol and DeeWeed kill a broad range of plants, making them best suited to total weed control.

Timing is critical for the best results and, again, calls for a careful look at the product directions. Treatments termed “pre-planting” are for use in seed or nursery beds ahead of planting the crop. “Pre-emergent” applications are intended to be made before the plants appear – and depending on the particular one used, will be labelled for use before the emergence of the crop, before the weeds show, or before either. “Post-emergent” herbicides tend to be highly selective in order to minimise damage to the desired plants.

Fungi are responsible for moulds, rots and a number of plant diseases. Fungicides generally need to be sprayed widely since they must come into direct contact with the fungus to kill it. They are used in two ways – either applied to healthy plants to prevent infection in the first place or alternatively to treat a plant that has begun to show signs of disease.

When it is known that a particular disease-causing fungus poses a threat year after year, then it is common to spray the whole crop as a routine precaution – in much the same way as a dog is given regular vaccinations to ward off illness.

However, sometimes if this preventative approach does not work, or plant diseases occur unexpectedly, other fungicides can be used to try to combat the infection, though it is notoriously difficult to fight off a fungal infection once it has got a firm hold.

The fight to prevent spoilage – of crops or property – is probably as old as our species itself and modern pesticides represent the pinnacle of that struggle in terms of their efficacy, reliability and ease of application. At the same time, their development has matched our own changing priorities with regard to our environment. Today, whatever the pest, there is likely to be a very effective pesticide – and with careful selection the job can be done with little or no harm to anything else.

Questionnaire: Are You Safe Around Pesticides?

Understanding the Different Kinds of Insecticides

Avoiding the Dangers of Pesticides
Share Your Story, Join the Discussion or Seek Advice..
I want to open and start business of fertilizer and pesticides, where do I get information about wt product to be used in which situation in agriculture, am b.tech engineering but I know we'll about farming, but want to know wt kind of diff product used in various conditions
Ganesh - 6-Nov-17 @ 2:48 PM
Title:
(never shown)
Firstname:
(never shown)
Surname:
(never shown)
Email:
(never shown)
Nickname:
(shown)
Comment:
Validate: