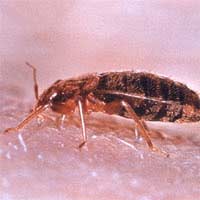 When Margie Frazer and her husband – both history-buffs and long-term Anglophiles – emigrated from their Ohio home to settle in rural Oxfordshire, they hoped they’d get a chance to visit a few of the places they had read about as children growing up in the US.

They didn’t, however, expect to get quite so intimately acquainted with some of Britain’s least savoury inhabitants as a result, but as they were soon to discover, if you’re buying antiques, you need to be careful – and getting a fair price can be the least of your worries!

“I’d always loved English furniture,” Margie explains, “and having a new house to furnish, well I was in heaven. I haunted all the antique shops in Oxford – but everything just seemed so expensive. We’d only just arrived and our move ended up costing us way more than we’d budgeted for.” (At the time, the exchange rate was two dollars to the pound.)

She was almost about to give up and order from more contemporary sources when, quite by chance, she came across a small shop in one of the back streets . To her joy, inside lay a beautifully upholstered Victorian chaise-longue – and at a price she could easily afford; the deal was struck and she took delivery a few days later.

Roddy (Margie’s husband) was the first to notice it, "when I got out of the shower. I was covered in little red spots all over my body and thighs – I looked like a pin-cushion. I’d fallen asleep on the chaise-longue watching the TV the night before, with one of the new British cats we’d gotten to go with our new life over here.”

Convinced that the cats had fleas, Margie took both her cats off to the local vet and dutifully dosed them, assuming that the problem was solved; it wasn’t to prove quite that easy.

“It happened again over the next couple of days – but what really clinched it was we’d shut the cats in the kitchen and we still got bitten. I’d heard that fleas can often hide in furniture and carpets between meals, so I thought I’d have a look. When I looked really closely at my lovely first-ever bit of English furniture, I nearly died!”

Margie was confronted with a scene she describes as “straight out of a horror movie”. Instead of the fleas she had prepared herself to see, the gaps in the frame and where the upholstery had become a little loose were packed with something altogether different – bed bugs – and loads of them!

“I had no idea what I was looking at – but I did know I sure didn’t like what I could see.”

It was clearly time to call in the professionals, but Margie was more than a little embarrassed by the whole idea. As a new-comer to the country, the idea of having to get a pest control company filled her with horror – whatever would her neighbours think? Fortunately, the reality turned out to be a good deal less eventful and traumatic than she had been fearing.

“I had to bite the bullet and ask some of my new neighbours for advice – which was an awful hard thing to do – but I’m glad that I did. They were fantastically supportive and helpful, and suggested this really good firm. They turned up and just took charge – it was excellent. They’d diagnosed those critters in no time and they were just so British about everything; polite, and wonderfully unflappable. We arranged a time for the treatment – a day or two later – and they sent us off for the day; by the time that we came home, they’d sorted everything.” (Their pest control company thoroughly and successfully fumigated the affected room. They’ve had no problems with bed bugs – or anything else – since.)

“Those guys were really great, but to tell the truth,” Margie confesses, “I’d kind of fallen out of love with the whole idea of antique furniture. In the end, we furnished the house from one of your big catalogue companies; this episode really put me off the whole idea of second-hand anything. Serves me right, I guess, for being a bit of a cheapskate!”

As for the chaise-longue – “well that became our first English bonfire,” Margie explains, “though we didn’t wait for November fifth!”